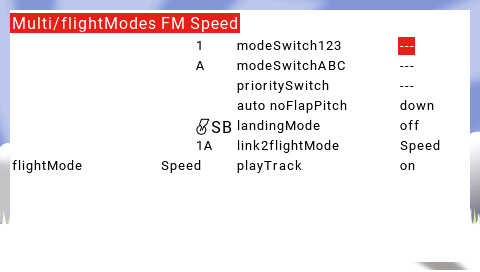 Flight modes are assigned to switch combinations.
Several switch combinations can be linked to the same flightmode.
Two switches can be chosen, creating 2-9 switch combis, linked to 1-9 flightmodes
>
Choose a priority switch to select OVERRIDE flight modes.
Maximum two flight modes can be assigned to this priority switch, for instance launch and zoom.
The second flight mode can only be used with a three position switch (mid position), or with a two position switch when activating 'auto' mode.
In this 'auto' mode, the second flightmode is activated on release of the down position of the priority switch. It is ended by the 'auto' mode trigger:
>
If used for launch modes, usually flaps needs to be retracted before going to normal flight modes. By retracting flaps and moving the elevator, the second flight mode will be ended, and normal flightmode switches will determine the flightmode again.
>
A landingmode can be activated per flightmode, which is triggered by a certain percentage of flpas deployment. If active, the percentage is adjustable when flaps are fully down.