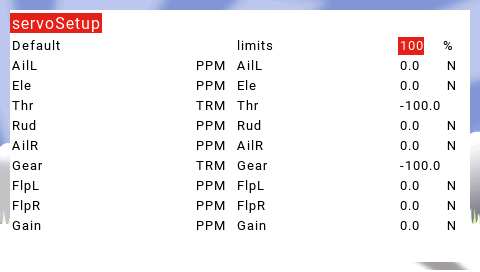 SAFETY MEASURE !!!
>
unplug motor power
>
Used to setup the servos using the model responses.
By using the sticks you can force the servos in one of the following positions:
- PPM, meaning PPM Center, indicated with an N as unit. The percentage PPM center offset can be altered using the menu.
- TRM, any other positive or negative number, being the servo limit positive or negative in percentage of maximum servo position
- C1 or another curve name, and Px, indicating the active point on that curve, and a percentage, indicating the relative value of that curve towards the maximum of the servo output.
A value of 90 for instance for P2, with a TRM pos value of 60, will correspond to a servo position of 54% of max servo deflection (and not 90 % of that value)