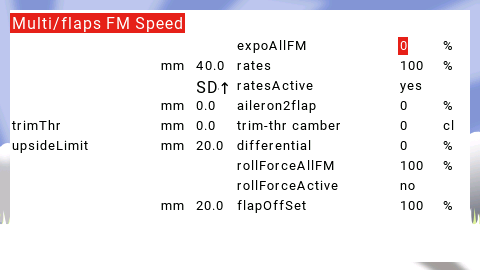 Expo is set for all flightmodes.
If an expoSwitch is set (ratesExpo menu), then this value is increased by 25% and 50% by chosing switch-mid and switch-down positions.
>
Rates is set per flightmode or rateSwitch.
If a rateSwitch is set (ratesExpo menu), then you can alter the value for all switch positions. This value is then active for all flightmodes for those switchpositions.
If rates are set per FM, then the rate can be set for the active flightmode, and for each flightmode a seperate value.
>
If Rates are switched off, the current flightmode will have 100% rates.
The value in mm can now be edited on the Rates field.
Changing this value HAS NO EFFECT ON THE ACTUAL MODEL BEHAVIOUR.
It is only used to calibrate the unitless % values to a meaningful value in mm.
>
Aileron2Flaps is used to mix in a roll input into the flaps.
It is set per flightmode.
>
Camber is also set per flightmode. Values will always be shown positive, but labeled "camber" for negative aileron deflection, and "reflex" for positiv (up) aileron deflection.
It cannot be set by this menu, but by applied the throttle trim switch.
The settingis expressed in trimclicks, with a max of 125 up or down.
>
Differential is set per flightmode. Positive differential will limit the upper limit of the aileron in roll, and negative differential will limit the lower limit of the down travel of the aileron in roll.
>
RollForceAllFM can be set from 0 to 100, and activated per flightmode. If activated, the roll input will suppress the flap input, allowing for roll authority even when applying full flaps.
>
FlapOffset is the value needed to get the flaps, with a servo center position corresponding to the middle of the extremes of the wanted flaperon deflections, in a flight neutral position.
For pure flaps (a-symetric setup) this value will be 100%.